From Boulder to NYC: how to build successful startup communities 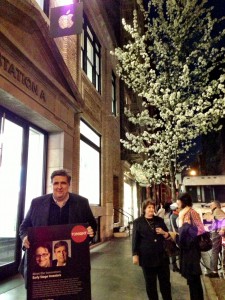 Last night at the Apple store in Soho Alessandro was on stage with Kelly Hoey and Brad Feld to talk about innovation and startup communities. 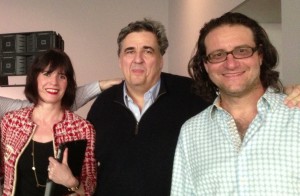 Kelly is co-founder and managing director of Women Innovate Mobile, an angel investor and startup advisory board member: she interviewed Alessandro and Brad about the ingredients of a successful tech community.

Brad – the co-founder of Foundry Group and TechStars, and author of “Startup Communities” – explained his four principles: 1) the leaders of the community must be the entrepreneurs, not the politicians or others; 2) the leaders must think long term, for the next 10-15 years; 3) the community must be inclusive; and 4) there must be many initiatives to make startuppers grow such as accelerators like TechStars.

Alessandro explained how the NY tech community has developed since the ‘90s, which is the story of “Tech and the City”; he stressed the role of the Mayor Michael Bloomberg after the 2008 crisis, aimed at diversifying the city’s economy.

Kelly pointed out that Bloomberg is a special mayor, being also a tech entrepreneur, and asked which role the local administration should have in fostering a tech community.

“ Bloomberg did the right thing launching ideas, igniting initiatives then leaving entrepreneurs and other stakeholders to be the leaders”. According to Brad the government should, first of all, “not harm” the community, and refrain from its natural instinct of willing to control things, such as to select the “right” companies to finance.

Can entrepreneurial skills be taught?, asked Kelly. Yes, but in a non traditional way, replied Brad, mentioning the experiential education model of TechStars, and his own experiments, for example the house he bought in Kansas City, where Google has built a superfast fiber network. Now the startup Handprint has won the prize of one year free rent in that house: “We’ll see what they will do”.

I was struck by what Brad said about how large a city can be to have a successful startup community: maybe just 50,000 people. “Geography is less and less important – he explained -. What’s important is that the community is open to collaborate with the nearby communities. For example, I’ve just been in Hoboken, NJ, where startups are growing: they should consider themselves as a neighborhood of NYC. Boulder is small, less then 100,000 people, but the startup community is thriving and it has expanded to Denver”. So, I asked him, wouldn’t you suggest a young person willing to build his/her own startup to move to a large city in order to take advantage to a critical mass of knowledge? “No, I do suggest to move to the city where you like to build your own life, for whatever reason”, replied Brad, who has talked about this, and about his choice to live in Boulder, in his new book “Startup Life” written with his wife.

That made me think of Massimiliano Brigonzi, the 23 year old co-founder of HintClub, whom we met in my hometown Novara. He said that he likes living in Novara (100,000 pleaople) and believes he can grow his startup there. He’s right!

And indeed one reason the NYC tech community is thriving is because so many entrepreneurs, engineers and tech guys love is life style, as we explained in our book.

At the beginning of the evening, Fred Wilson came to say hello to Brad and Alessandro: I took the opportunity to have a picture of us together, very thankful for his foreword to our book. 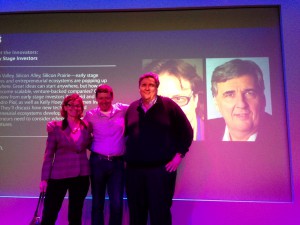