The New York Angels are the most active Angel group in the U.S., according to the latest Halo report. They invest in more startups than their colleagues in California and in New England. If you add that it’s getting easier to find tech talent in NYC and it will keep improving with graduates from Cornell NYC Tech and other new academic programs, you understand why a growing number of foreign entrepreneurs are looking at the Big Apple as THE place to move to.

Yesterday we were happy to talk about “The NYC Startup Scene” with a group of about 30 entrepreneurs from seven different countries, mostly in Central Europe, including Germany, Hungary, Romania and Turkey: they were attending “World to New York City”, a program organized three times a year by the New York City Economic Development Corporation, each time with a focus on a different region. “We run this program for international entrepreneurs considering NYC as a potential destination – explains Patricia Bayley, the NYCEDC senior project manager for World to NYC (in the picture below). It’s three days of programs to help network: visit companies, incubators, meet investors etc.” 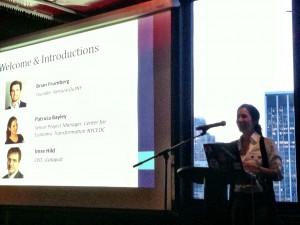 This week the entrepreneurs were from 15 companies, selected by NYCEDC in partnership with iCatapult, an incubator based in Budapest. “The tech startup scene is very lively in Hungary too, we have very good engineers and software developers, but we lack business skills – explained one of the attendees. The reason to move to the US is to look for funding, business partnerships and marketing know-how in order to become global companies.” They all think of creating a dual entity: legal headquarters in the US, with product development in the original country.

The City did its best to convince these foreigners to choose NYC as their home: look at this breathtaking view from one of the lounges at 230 Fifth Avenue, where the party Monday night took place, organized by iCatapult and  NYCEDC, with the help of Brain Frumberg, founder of VentureOutNY. 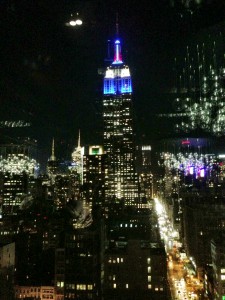 But many were still evaluating whether to move further west to Silicon Valley: we hope our book “Tech and the City” – which was given to them as a guide on whom to meet and what to do in NYC – will help them make the right decision.

In any case, the success of programs like “World to New York” is a testimonial of how NYC is able to attract more and more business from abroad. Maybe too much, if it’s true that there is a “Bubble” already in the number of startups in the City, as David Tisch, co-founder & mentor of NYC TechStars, told us.

Read David’s comments (page 174 of our book): “I think the bubble is in the number of startups (in NYC). Four or five years ago, there weren’t that many companies, so each company had more talent all the way down. There was a depth of talent. I use basketball here, the NBA, as an example. When there are too many teams, the overall product gets worse. When there are too many companies, the talent gets too spread out such that there is not enough depth of talent in enough places to really do great things. I think that this will fix itself naturally over some time. It’s hard when there is so much seed money for that to get fixed right away. When everything gets funded, a lot of it doesn’t work. Again, it takes something between 16 months and three years for something to fail, so the feedback loop is not quick enough to say ‘OK, there is too much of this, this isn’t working.’ But it’s not an economic bubble— there is not enough money at risk.”