Silicon Alley: some recipes for Italy and other countries?

It’s really exciting being in New York right now: there are so many new initiatives sprouting around. We’ll talk about it tomorrow, June 27, at 6 pm at the Italian cultural institute  (686 Park Avenue, between 68th & 69th street) with Craig Gotsman, Director of Technion-Cornell Innovation Institute; Maurizio Arienzo, president and CEO of Nova Ware; Carlton Vann, Director of Division for International Business, NYC Mayor’s Office for International Affairs and Vito Racanelli, Staff Writer, Senior Editor at the financial weekly Barron’s. We’ll discuss whether the NYC model could be an inspiration for Italy and what exactly could be “copied” by Italians.

Here in NYC the Bloomberg’s administration is trying to use its last months to do as much as possible. For example it has launched a new biotech incubator in Harlem; it’s pushing to diversify the city’s tech industry into new sectors such as health tech (see Pilot health tech NYC and Innovate health tech NYC); it’s supporting the first business incubator in  Staten Island.

What will happen with the new Mayor from January 2014 on? That’s a question everybody asks. We talked about it yesterday at TechSpace Union Square with Lloyd Trufelman and a bunch of smart people working there. What will NYC tech scene look like in ten years? We hope that there will be a lot of startups created by alumni of the new Cornell NYC Tech; that successful young entrepreneurs who made a lot of money with their first startup – such as David Karp with Tumblr – would have reinvested their fortune into new companies; and that more women will be founders of startups, thanks to passionate organizations such as Girls who code, which has  just launched its 2013 Summer Immersion Program. 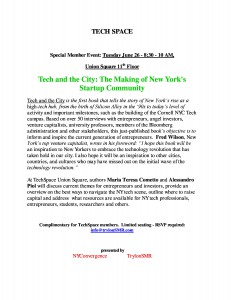