Gran Torino. The City of Turin’s startups look at the NYC model

Italy is not only “sun, pizza & mandolin”. Yesterday, the City of Turin’s mission to New York stressed that, showing the best of its initiatives in tech education and startups. The occasion was a debate at the Italian cultural institute about startup communities, a comparison between the NYC model and Turin’s. 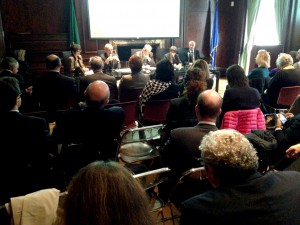 Turin and NYC have a similar story: they both are recovering from the crisis of their main industry – the auto industry in Turin, home of FIAT (the majority shareholder of Chrysler) and Wall Street here – and diversifying into new businesses, including the tech industry.

“Italy is changing, albeit slowly”, said professor Marco Cantamessa, president of I3P, the Innovative enterprise incubator of Politecnico di Torino. (in the photo below). He gave  some figures about the impact of startup law introduced last year by former Mario Monti premier: 1,200 startups are registered and applying to get the new incentives; 25% come from an academic environment, 26% are based in three cities (Milan, Rome and Turin), and 25% are in an industrial business. I3P is an independent company that is measured by the jobs it creates, explained Cantamessa; it receives 250-300 business ideas per year, it supports 50 business plans and launches 12-15 startups per year, funding each of them with seed money. In all I3P has raised and invested about 3 million euros, so far, creating 770 jobs: “Each job has cost 10,000 euros of public money”, added Cantamessa. Right now I3P is hosting 34 startups, in a way that is similar to the NYU incubators, which Cantamessa visited looking for some kind of collaboration.

Enrico Macii, vice dean for Research, technology transfer and International affairs of Politecnico di Torino and Edoardo Rabino of Fiat talked about the partnership between those two entities, which lead to the creation of an international Master degree in Engineering in March 2010: also Chrysler (Fiat group) and the University of Windsor (the Canadian city close to Detroit, where FIAT ceo Sergio Marchionne graduated) are involved in the initiative. Another interesting example of collaboration between academy and private industry is the “space portal” based in Turin. Attilio Ferrari, professor of Astronomy and Astrophysics of the University of Torino and Armando Ciampolini, manager of ALTEC/Thales-Alenia space talked about the GAIA mission, which will take off at the end of December. 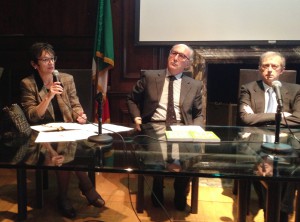 The Turin delegation, lead by the mayor Piero Fassino (right in the photo above, with me and, in the middle, Riccardo Viale) discovered that New York State has just approved a new law with big tax incentives for startups: Leslie Whatley (in the photo below), the executive vice president of Startup New York for the Empire State Development Corporation explained that non US companies are welcomed to  create startups in NY state and take advantage of the incentives. But that will be the topic of our next post. 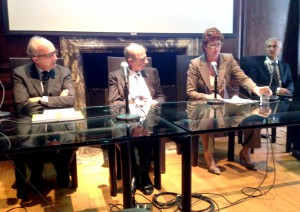 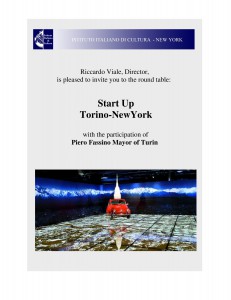