Not just for Techies: Startups can be focused on Humanities & thrive in NJ

New Jersey rocks! And startups are not just for techies. Don’t you believe it? Listen to “The Blues of Humanities” by “The Bruce Springsteen of Startups”. 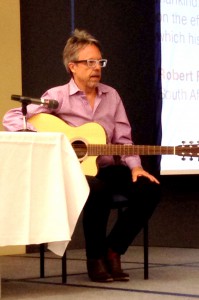 That was the gran finale of a terrific panel discussion at Montclair University, NJ, on April 16: the author of the song and performer (in the photo above) is the scientist & artist Guy Story, CTO and Chief scientist at Audible.com. 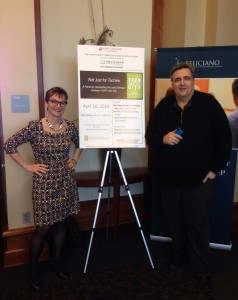 The event was organized by Teresa Fiore, associate professor and Inserra chair in Italian and Italian American Studies, and by Dennis Bone, the director of the Feliciano Center for Entrepreneurship. Alessandro and I were among the panel discussants together with Guy and Claudio Vaccarella, CEO of HyperTV. The Italian General Consul in New York, Natalia Quintavalle, opened the evening stressing the importance of Italian-Americans’ and Italians’ contribution to the economy of New Jersey. More than 100 students, teachers, pros were in the audience.

The theme of the discussion: “Humanities and language studies can also be the spark for a startup, especially in New Jersey and New York City”. So we explored the intersection of languages, technology and entrepreneurship.

Professors Fiore and Bone (in the photo below) are experimenting multidisciplinary initiatives, building relationships and collaboration among different department within the campus and with other organizations out of the university (which is the second largest university in NJ, with almost 20,000 students). “We are interested in dynamic ways of looking at the humanities and foreign languages particularly in relation to technological innovation”, Teresa Fiore observed, “the Italian Program at Montclair State – thanks to the support of the Inserra Endowment – is embarking on a curriculum redesign that aims at embracing technology, including social media, in order to fulfill interdisciplinary goals and to better prepare students for the professional world.” Professor Bone added: “We are trying to create an ecosystem for young entrepreneurs in New Jersey”. In fact last fall he launched new experiential courses at the Feliciano Center: teams of students with different backgrounds are challenged to solve thorny problems, assisted by mentors from the industry. The first teams will pitch their business ideas on May 13th. 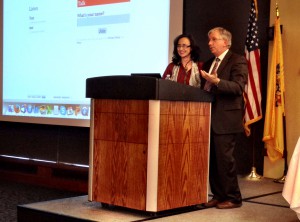 A big player on the NJ tech scene is Audible.com, which is based in Newark, NJ. Guy pointed out how Audible.com is a good example of the intersection of languages, technology and entrepreneurship: its business are words and to delivery them in the audio format it invented a new device, the first portable player to play sounds downloaded from the Internet (the Smithsonian Museum in Washington, DC, still displays it as an important piece of new media history). Audible.com show also that you can succeed even if you are not based in a “cool” city like NYC. Actually, to its founder and CEO, Don Katz, NYC is not so cool, as he told us in the interview for “Tech and the City”:

“I chose New Jersey also because a lot of tech talent was out in this Jersey corridor, arguably more than there was at that point (1995, ndr) in New York City. Our CTO Guy Story, for instance, comes from Bell Labs and many other engineers also came from Bell Labs. To me New York is not hipster heaven. All the dinosaurs that we are changing are in New York. It is a bunch of old Lunchtime O’Booze publishing executives who arrogate to be the industry when they have never invented or done anything. All innovations in the book business—the paperback book, the book club, the superstore, the discounters, Amazon, Audible— were all created outside the industry: it was never organic. A process similar to that which occurred in music and cinema. In short, content guys are not very progressive.”

Staying a few miles away from Silicon Alley, Katz grew Audible until in 2008 Amazon.com acquired it for $300 million, leaving it independent under his leadership. 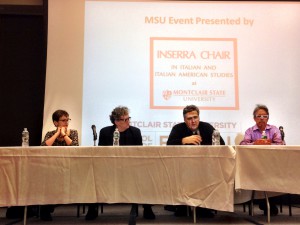 Guy said that Audible.com is trying to build a tech community in Newark too, but it’s not that easy and it takes time: “You need a critical mass of creative people with ideas and tech skills getting together”.  Events like the one at Montclair are certainly the right way to get people together and spark a conversation that may lead to a new startups’ hub.