MAKE IN ITALY – A great success in NYC 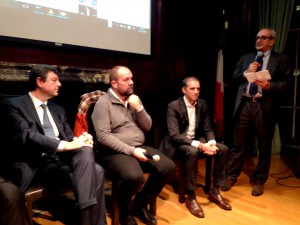 Full house at the Italian Cultural Institute (ICI) of New York for the opening of the exhibition “MAKE IN ITALY – 50 YEARS OF ITALIAN BREAKTHROUGHS: FROM THE FIRST PC TO THE FIRST SPACE-BOUND ESPRESSO MACHINE”, on November 12, 2015. More than 200 people showed up.  Giorgio van Straten, writer and ICI Director (standing in the photo above), welcomed the audience and said he was happy the exhibition would be visited by hundreds of American students who learn Italian in the NY-NJ-CT schools supported by IACE (Italian American Committee on Education). They would learn that Italians are excellent not only in arts, fashion and food, but in technology too. 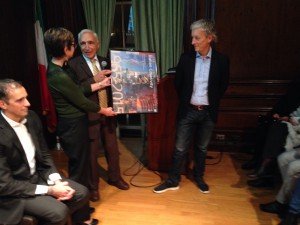 Joseph Sciame, President and Chair of the Italian Heritage & Culture Committee of New York (in the photo above, holding the poster), dedicated the month of October to “Italian creativity in technology”, the same theme of the exhibition. He said that celebrating Italian contributions to progress in technology was very important for the Italian-Americans like himself, feeling proud about it. 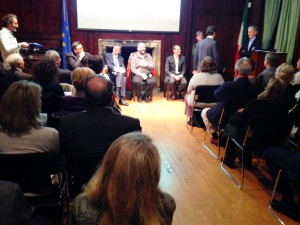 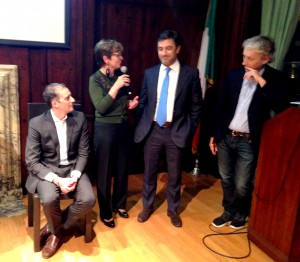 Gianluca Galletto,‎ Director of International Affairs at the New York City Economic Development Corporation (standing with blue tie in the photo above) spoke about how Mayor Bill de Blasio’s administration wants to create the best business environment for tech entrepreneurs. He said that startups can grow having operations both in Italy and in NYC, and taking advantage of the best of the two worlds. 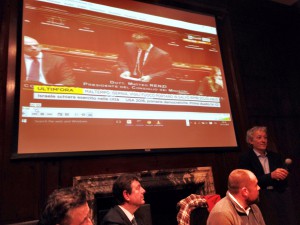 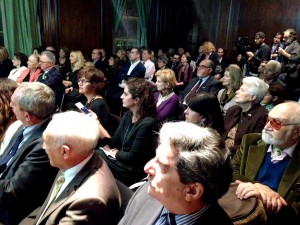 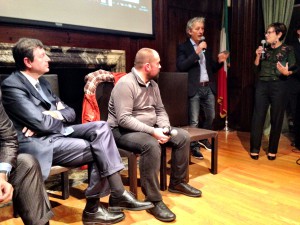 Riccardo Luna, the Italian Digital Champion (standing with a mike in the photo above) and Maria Teresa Cometto (same photo) were the curators of the exhibition and the moderators of the panel discussion at the opening. Luna remembered that on October 14, in Rome, he went to visit the Italian Prime Minister Matteo Renzi with Massimo Banzi, co-founder of the Arduino Project, and with Giovanni De Sandre and Gastone Garziera, two of the creators of P101, “The first personal computer in the world”. It was exactly the 50th anniversary of the P101 launch in NYC. “Why remember all this? – asked Luna -. It’s important to define the identity of a community and find a mission. We must remember to the Americans what we accomplished, but also to ourselves. In order to tell us that we can make it also in the future.” 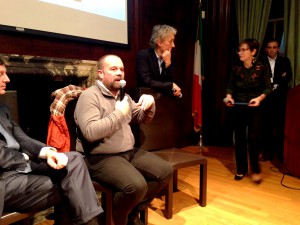 Massimo Banzi (talking in the photo above) told the story of how the Arduino Project was born in Ivrea ten years ago. It was created for students of the Interaction Design Institute, at Olivetti’s “Casa Blu” in Ivrea, as an easy tool for fast prototyping without a background in electronics and programming. Arduino is an open-source  platform based on easy-to-use hardware and software. “With it, you don’t need anybody’s permission to innovate!”, said Banzi. 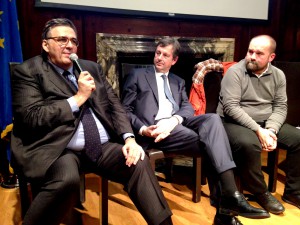 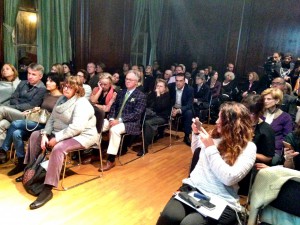 “Everybody in the US knows the story of Microsoft and Bill Gates, and of Apple and Steve Jobs, because America celebrates success stories. In Italy we should do it too”, said Alessandro Piol (talking on the photo above), co-founder at AlphaPrime Ventures and son of Elserino Piol, the Italian “father” of venture capital. Alessandro reminded that there are many excellent Italian engineers, educated at great universities, but too often they move abroad looking for better business opportunities. 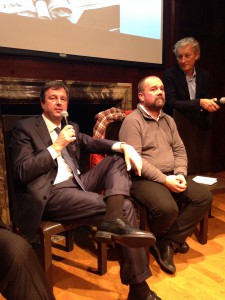 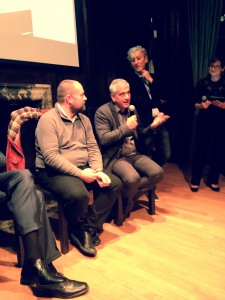 “Olivetti is still operating, and engaged in the new digital technologies”, said Olivetti CEO Riccardo Delleani (talking in the photo on the left). In fact in the exhibition there was a new 3D printing machine made by Olivetti. And talking about 3D printing, Enrico Dini (talking in the photo on the right), aka “the man who prints houses”, promised that in 2016 he’ll print a whole house upstate New York to showcase the technology he developed with his startup D-Shape. 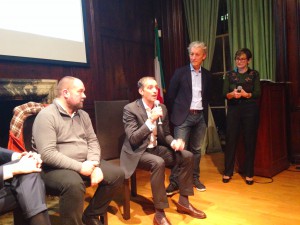 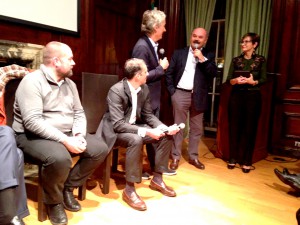 David Avino (talking in the photo on the left), the founder and CEO of Argotec, explained why he made the ISSpresso space-bound coffe machine with Lavazza. “It’s not a publicity stunt – he said -. Its sophisticated technology will be applied to products for everybody on Earth. And NASA is buying ISSpresso because it is a way to keep happy the astronauts, who live for months in a small room and need to relax and recharge”.

And talking about Italian coffee and food, Oscar Farinetti, the founder of Eataly, made a surprise appearance (talking in the photo on the right). Actually, he is an innovator too, because the formula of Italy’s marketplace & restaurant is totally original showcasing the best of Made in Italy. 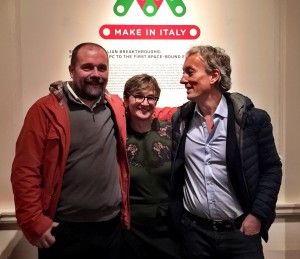 At the end there were refreshments, courtesy of Beretta and Lavazza.

And a lot of enthusiasm for possible future initiatives in NYC about innovation by Italians.