Tech startups’ language: a bridge between the US and Italy? 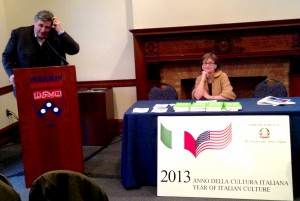 PHILADELPHIA – Yesterday, April the 4th, Alessandro and I attended the XXI AISLLI Conference at the University of Pennsylvania: “Italicity. The Languages of Italy in the United States between Tradition and Innovation”. AISLLI (Associazione Internazionale per gli Studi di Lingua e Letteratura Italiana) is the only International Association of Italian Studies at the university level, a member of the International Federation for Modern Languages and Literature of the UNESCO, and it is supported by scholars and politicians all over the world. Professor Fabio Finotti organized the event putting together an interesting mix of cultural lectures and discussions about business. Language & business are strictly related, stressed Piero Bassetti, a Cornell alumni, former President of the Italian Association of Chambers of Commerce Abroad (CCIE) and currently President of the think tank Globus et Locus, besides being a member of AISLLI scientific committee. 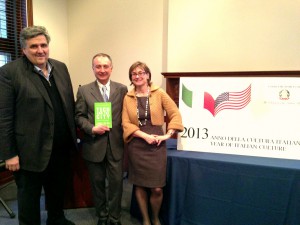 Alessandro and I were invited to talk about “Tech and the City”, which is meant also to be a bridge between the US and Italy. It was the occasion for us to recap our Italian book tour, which went from March 13 to 27 and was really interesting. Here is what we told the audience. 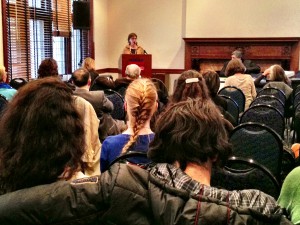 “Thanks to our creative and multicultural spirit, which is rooted in Italian history, we can be very successful in the digital economy”.  That’s what a very enthusiastic young entrepreneur – Massimiliano Brigonzi, 21 year old – said in Novara where we held one of the events of our book tour in Italy last month.

We had meetings in Milan, Venice, Rome, Cagliari, Turin and Lugano, besides Novara, and we discovered that tech startups are becoming sexy and trendy also in Italy. Where a new generation of  “neo-peoples” – at ease in the global world – is growing and represents a ray of hope to get out of the long lasting economic crisis.

The digital economy offers huge opportunities to glocal businesses. A good example is one of the most successful startups in New York that we profiled  in “Tech and the City”: Etsy, which is an online marketplace where artisans and craftsmen can display their own hand made creations, in their own virtual shops, and sell them. Etsy is based in Brooklyn and is used by over 800,000 artisans in 150 countries, Italy included. So a young artist who makes jewels or clothes or furniture in Italy can directly reach any customer anywhere in the world, without the any intermediation. Etsy was founded in 2005 by Robert Kalin, a penniless 24- year-old with a passion for do-it-yourself  and the problem of finding the right online site where he could sell his wares. His philosophy, carried on by the current CEO of Etsy Chad Dickerson, is about  “human scale economies” and a different model of economic growth, based on small businesses around the world that build local, living economies. It’s the peer-to-peer economy, according to the creator of Meetup Scott Heiferman; and it works, because since 2009 the company has been profitable, with prominent venture capitalists backing it and making it worth 600 million dollars. It’s interesting to notice that Etsy’s headquarters  in Brooklyn – where only things produced by its own artisans are on display – were designed by a young Italian designer, Sara Matiz, who is based in New York and has created also our book cover.

A startup like Etsy could be built in Italy too. In fact one recurrent theme of the discussions in our book tour was how Italian cities can learn to leverage their own skills and tradition to grow as well as the City of New York did.

In Milan for example the Dean of Politecnico Giovanni Azzone stressed the similarities between the Italian capital of fashion, design, media, advertising and finance, and New York. He reminded that Milan has been already reinventing itself from being an industrial city and can do more, by combining technology and innovation on one hand and design and culture on the other hand.  In Milan there are already a few initiatives that foster startups and that have high ambitions: the accelerator, incubator & venture capital firm Digital Magics, which is going to be listed at the Italian stock exchange; CoworkingLogin and Talent Garden, two co-working spaces that we have visited, meeting with young people who have the same enthusiasm and entrepreneurial spirit that you can see in similar spaces in NYC.

Talent garden in fact has the ambition to set up its own campus in Manhattan. It was founded in Brescia in 2011, and it already has a presence in Bergamo, Padua, and Turin, besides Milan. “Our dream is to launch a Talent Garden ecosystem in every city in the world, an idea based on the Silicon Valley example,” you can read on their website. “We hope to build a big community of minds, a vast network of shared resources where every single member has the best possible opportunities to develop ideas and projects, independently of where in the world they may be from. Talented people should be able to collaborate with one another and interface with businesses, entrepreneurs and the media anywhere in the world as well as in their own country.”  It’s the same principle of exchange of ideas and collaboration among technological communities in various countries that inspires General Assembly, the largest “school- incubator-co-working space” in NYC.

Alessandro and I have interviewed in New York one of the partners of Talent garden, Elio Narciso, Internet entrepreneur and angel investor who, since 2004, has been shuttling between Italy and the United States after having earned an MBA from the MIT Sloan School of management. One of Narciso’s latest creations, Yoodeal, operates between New York and Milan: it’s an online personal shopping service created in March 2011 and currently launched in Italy and Spain, but soon to be launched in other markets. Narciso’s business model is the same already proved successful for many Israeli entrepreneurs: using resident European talent for the engineering and technological staff, keeping it in Europe because there it’s cheaper and more loyal, while setting up the sales and marketing team in NY, looking for customers and capital funding in America. In other words Narciso is the typical new kind of Italian or Italic entrepreneur who can thrive going back and forth different markets and cultures, taking advantage of the best of them.

In our Italian book tour we saw other experiments of  building a global presence with Italian roots. One is in Venice, which is not at all a dying city: in its heart the Ca’ Foscari university is developing an Innovation center and is transforming its operating way towards a dynamic and global cultural hub, thanks to the entrepreneurial spirit of its dean Carlo Carraro. For example ca’ Foscari is going to launch a new master focused on technology startups in collaboration with the H-Farm, the “human farm” that grows tech talent in the countryside, 30 minutes from Venice. It was created by Riccardo Donadon  in 2005 and it hosts now 300 startuppers at different stages, from teams at the very early steps of a business idea to well established digital companies that work for famous Italian brands like the fashion firm Diesel, whose owner Renzo Rosso is also an investor in H-Farm. In May 2008 Donadon opened a second epicenter in Seattle, WA, USA amend he’s planning to open a third one in Mumbai, India.

In Novara the above mentioned Massimiliano works in an incubator (3N) that is linked to the faculty of Economy at the University of Piemonte Orientale. His company HintClub (a new kind of social network) was inspired by a trip to Silicon Valley, but he stressed that he chose to build it in a small community like Novara because he likes living there and it’s possible thanks to the new technologies.  3N is hosted by a foundation, Novara Sviluppo, together with other high-tech companies that are not only Italian but also from the US, Japan and Spain.

In Cagliari Renato Soru is revamping  his company, Tiscali, the first Internet provider in Italy. He’s launching new services such as an original search engine, iStella, which shares documents and content that so far had not been available online. During our book’s event Soru announced also the launch of an Open Campus within Tiscali for young people who are thinking of building a startup and need a space to share ideas and interact with other professionals and mentors.

In Rome, the new museum MAXXI can also open a new space to host meetups for creative young people coming from different fields and willing to operate and start new initiatives. So said Giovanna Melandri, the president of MAXXI, while talking about what Italy can take from the NY tech community.

What’s missing in Italy compared to New York – we learned from our book tour – is not only a government that supports entrepreneurs like Mayor Bloomberg has done in NYC. It’s also a better cooperation and a spirit of community among the many different protagonists of the tech scene. Many people we met observed that in Italy there is a sort of anarchic spirit prevailing, with more energies spent in rivalries and fighting than in building something together. Maybe that’s why the country is in such a mess also at the institutional and political level. Instead one lesson of “Tech and the City” is that you can have both a fierce competition on the free market – for clients, funds, talent – and a great collaboration to make the whole market grow and get more opportunities for everybody. 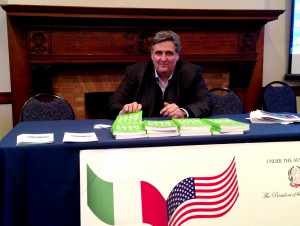