After Bloomberg? The NYC startup ecosystem will thrive anyway

Relax: the end of the Bloomberg administration won’t be the end of the NYC startup ecosystem! That’s the message from Fred Wilson, one of the panelist at the discussion “Tech and the City” organized by the Columbia Engineering School, last night. The other two panelists were Alessandro Piol and Jon Oringer, founder and CEO of Shutterstock; the moderator was Mary Cunningham Boyce, the new Dean of the Fu Foundation School of Engineering and Applied Science at Columbia. 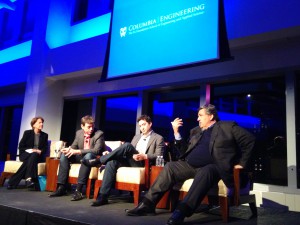 The Dean praised the book “Tech and the City” as a great introduction to the NYC startup ecosystem and asked what will happen with the new mayor. “The Bloomberg administration was very friendly to the city’s tech community – replied Wilson -. But the tech boom in NYC was happening already before him and it would have happened anyway. The government is not where the action is. It’s business the driver. If we rely on government to create businesses then we’ll turn out like the Soviet Union!”. The audience burst out in applause and laughter.

It was a full house, made of current students and of alumni of the Columbia Engineering School, for a night that was also a celebration of their entrepreneurial spirit: at the end several startups created by students did their demos. 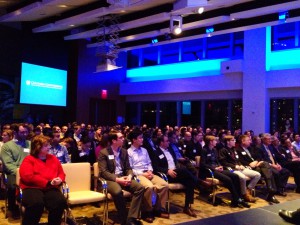 How can NYC attract and keep tech talent? “Talents come if they get opportunities and the city’s tech community is offering a lot of them – said Piol -, but also people come and stay if they love living here. And actually today New York is a nice – clean, safe and friendly – place to live in, contrary to stereotypes”.  “New York offers many advantages to startups that want to grow globally like mine – said Oringer -. Here it’s very easy to hire people who are bi-lingual or tri-lingual for example. Not to mention how good is mobility in the city via the subway or cabs”.

Wilson doesn’t see a manufacturing/hardware booming coming to New York, because the city’s culture is different from Silicon Valley’s and China’s. And talking about cultures, Wilson said that one of his criticisms to NYC is about its trade mentality: people here  tend to buy and sell, because of the city’s merchant roots. “That was not Steve Jobs’s mentality, he wanted to build a legacy – added Wilson -. We must change that and create big, independent, sustainable, durable tech companies in New York!”

Is the tech industry  in a Bubble, asked a student, mentioning the $3 billion plus valuation of Snapchat? “Nothing good is built without Bubbles – replied Wilson -. It’s the irrational exuberance that gives startups money to create new things”. “Nobody can tell – said Oringer -. When Google bought YouTube for $1.65 billion people thought it was crazy, today YouTube is one of the most valuable assets of Google, maybe it’s worth $20 billion”. “We really don’t know if it’s a Bubble – added Piol -. We just try to do our job, which is to find good companies at their early stages, at fair valuations”.

Who knows, maybe some of them will be founded by the Columbia Engineering School’s students and alumni.