Making it in NYC from Germany and Italy

Two delegations from Germany & Italy plus people from many other countries including Australia, Sweden, Korea and Jordan: they were all together last night at Brooklyn Borough Hall to discuss “challenges and rewards of starting up in New York City from abroad”. 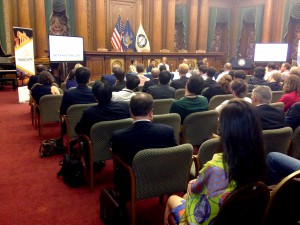 It was a great crowd, thanks to New York International, an organization founded three years ago by Stefanie Lemcke, who is originally from Germany. “We want to help startups from all over the world to make it here – explained Stefanie -. The idea is that New York can become the global urban entrepreneurial hub”. 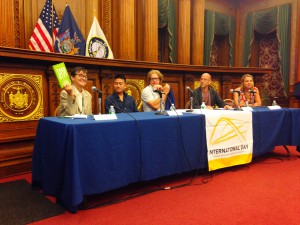 Stefanie moderated a discussion where I was one of the panelists, explaining what I found out interviewing NYC entrepreneurs and investors for “Tech and the City”: the importance of the quality of life; the energy and the “animal spirit” of startups’ founders; the money, generosity and “give back” philosophy of investors, are all important reasons why people want to settle down here and why the NYC tech community is so successful.

Case in point: another panelist, Borahm Cho – who is Korean but raised in Germany – said he decided to move here from Berlin because he liked “the overlapping of all sectors and industries in NYC, the interaction among people and ideas…”. Borahm founded in NYC kitchensurfing, a network of chefs who come and cook in your home. He said he couldn’t have done it in Germany: “Berlin is ten years behind Brooklyn, Germans are not so open about new ideas”.

Indeed I was surprised to hear from the Berlin startups that Germany is not so different from Italy in terms of how conservative the business and investment environment is. That’s why they look to NYC and the US as an opportunity to grow and expand globally.

So it’s not a coincidence that the same week in NYC there were two delegations of startups, one from Germany and one from Italy. The latter was organized by InnovAction Lab: a program for university students who are interested in building a company. So far they have involved more than 700 young people and generated about 30 startups, raising 5 million euros. Every year they launch a contest and the winners go to a trip abroad to learn about local tech community. The last edition winners are SOLO and Slapped, and they are here in NYC to meet a lot of startups and investors. Their mentor Roberto Magnifico launched the invitation to Stefanie and New York International to go to Rome and start a collaboration with the Italian startups. Good luck to all of them! 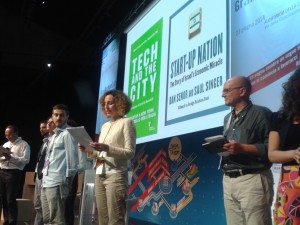 In the photo above: Roberto Magnifico (right) during the final event of InnovAction Lab 2014, in Rome

At Brooklyn Borough Hall the other two panelists were the Australian Robert Petty, founder and CEO of Sports195, and Jonathan Askin, tech law professor at the Brooklyn Law School.

Before the panel discussion there were other speakers: Ahmad Alhendawi, UN Secretary General’s Envoy on Youth, about job opportunity for young people in the world; Albert Wenger, partner at Union Square Ventures, about disruption and innovation; Kyle Kimball, president of the New York City Economic Development Corporation, about how the city can help international entrepreneurs get started and succeed. 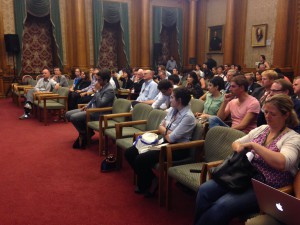