Did you know the first personal computer was invented by an Italian? As well as the first microchip and many other breakthroughs in technology. You will find out this and much more, when you visit the new exhibition “MAKE IN ITALY – 50 YEARS OF ITALIAN BREAKTHROUGHS: FROM THE FIRST PC TO THE FIRST SPACE-BOUND ESPRESSO MACHINE”, open at the Italian Cultural Institute (ICI) in New York from November 13 to November 25, Monday to Friday, from 10 am to 5 pm.

The opening is on November 12, at 6 pm, with the participation of many prestigious speakers: Giorgio van Straten, writer and ICI Director; Joseph Sciame, President and Chair of the Italian Heritage & Culture Committee of New York, which dedicated the month of October to “Italian creativity in technology”; Alessandro Piol, co-founder at AlphaPrime Ventures and son of Elserino Piol, the Italian “father” of venture capital; Massimo Banzi,  David Avino, Riccardo Delleani, protagonists of three of the innovations showcased in the exhibition. The panel discussion “What’s next for Italian creativity in technology?” will be moderated by Maria Teresa Cometto and Riccardo Luna, The Italian Digital Champion.

The exhibition takes its cue from 1965, when a prototype of the Olivetti Programma 101 (P101), was presented at the World’s Fair in New York. “The first desktop computer in the world”: this is in fact how America welcomed the launch of P101 in New York in October 1965. A small group of “crazy” young Italian engineers led by Pier Giorgio Perotto created that machine at Olivetti, the Ivrea company then famous for its mechanical typewriters. In the ’60s computers were few, gigantic and available only for experts. Instead P101 could fit on a desktop, was friendly, and it could be used by a secretary; its success was so huge, that the US space agency NASA bought it and used it for the first mission to the moon. The P101 will be on display together with four other objects.

The second is Intel 4004: the first commercially available microprocessor in the history of computing, “a computer on a chip”. It was developed by Federico Faggin, a physicist who in 1968 went to Silicon Valley to work at Fairchild Semiconductor. There, Faggin invented the Silicon Gate Technology (SGT), which was crucial for the manufacturing of smaller, more reliable logic circuits. In 1970 Faggin was hired by Intel to build a new family of microchips. The idea was that the CPU (central processing unit) could be built on a single chip. Faggin not only used his SGT technology to create the microchip, but also designed the necessary methodology: a random logic, very different from the logic used for a memory card. Today microprocessors are used in everything, from the smallest embedded systems and smartphones to the largest supercomputers.

The third object is Arduino, an open-source prototyping platform based on easy-to-use hardware and software. Arduino boards are able to read inputs – light on a sensor, a finger on a button, or a Twitter message – and turn them into outputs – activating a motor, turning on an LED, publishing something online. Its philosophy takes inspiration from the P101: easy to use and with a nice design – so nice, that in 2014 Arduino was introduced into MoMA’s collection. It was created in 2005 by Massimo Banzi, and four partners, for students of the Interaction Design Institute, at Olivetti’s “Casa Blu” in Ivrea, as an easy tool for fast prototyping without a background in electronics and programming. Now Arduino is used by a worldwide community of Makers: students, hobbyists, artists, programmers, and professionals.

Then there is ISSpresso, the first ever system for brewing espresso in the extreme conditions of outer space, created by two Turin-based companies, Argotec and Lavazza. The first “made-for-space coffee” was tasted on May 3, 2015, by Samantha Cristoforetti, the Italian astronaut from the European Space Agency (ESA), on the International Space Station (ISS). David Avino founded Argotec in 2008, an engineering and aerospace software company, specializing in astronauts’ training. Argotec research on nutritional food for astronauts, has led to the creation of healthy and tasty products now available for all. “The space-bound coffee machine idea came as the space meal’s natural conclusion”, explained Avino. The logical partner could only be Lavazza, because innovation and research have been a cornerstone of its history since Luigi Lavazza founded the company in 1895. 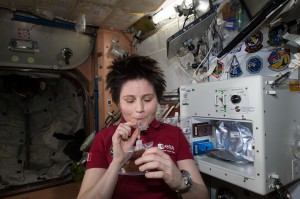 Finally, there is a new product from the Canavese, the so called “Silicon Valley of Italy”. It is the area around Ivrea, the city where Olivetti was founded in 1908 and still has its headquarters. Times have changed, but the Olivetti DNA and its legacy in terms of technological skills and entrepreneurial spirit are very much alive. Today in the Canavese there are hundreds of entrepreneurs, excelling in industries such as mechatronics and IT. It is an ecosystem that the new Olivetti (now part of TIM group) wants to leverage to launch its first 3D printer, aimed at small and medium-sized companies that need a faster and cheaper way to develop new products. The machine will be 100% made in the Ivrea area, and will use Arduino.

So, the exhibition is not only a celebration of a glorious past, but it wants to show that Italian creativity continues to combine tech innovation and cool style, and it is a means to open a discussion about Italy’s potential to grow thanks to its “brains” and entrepreneurial spirit.

(previously published on We the Italians )